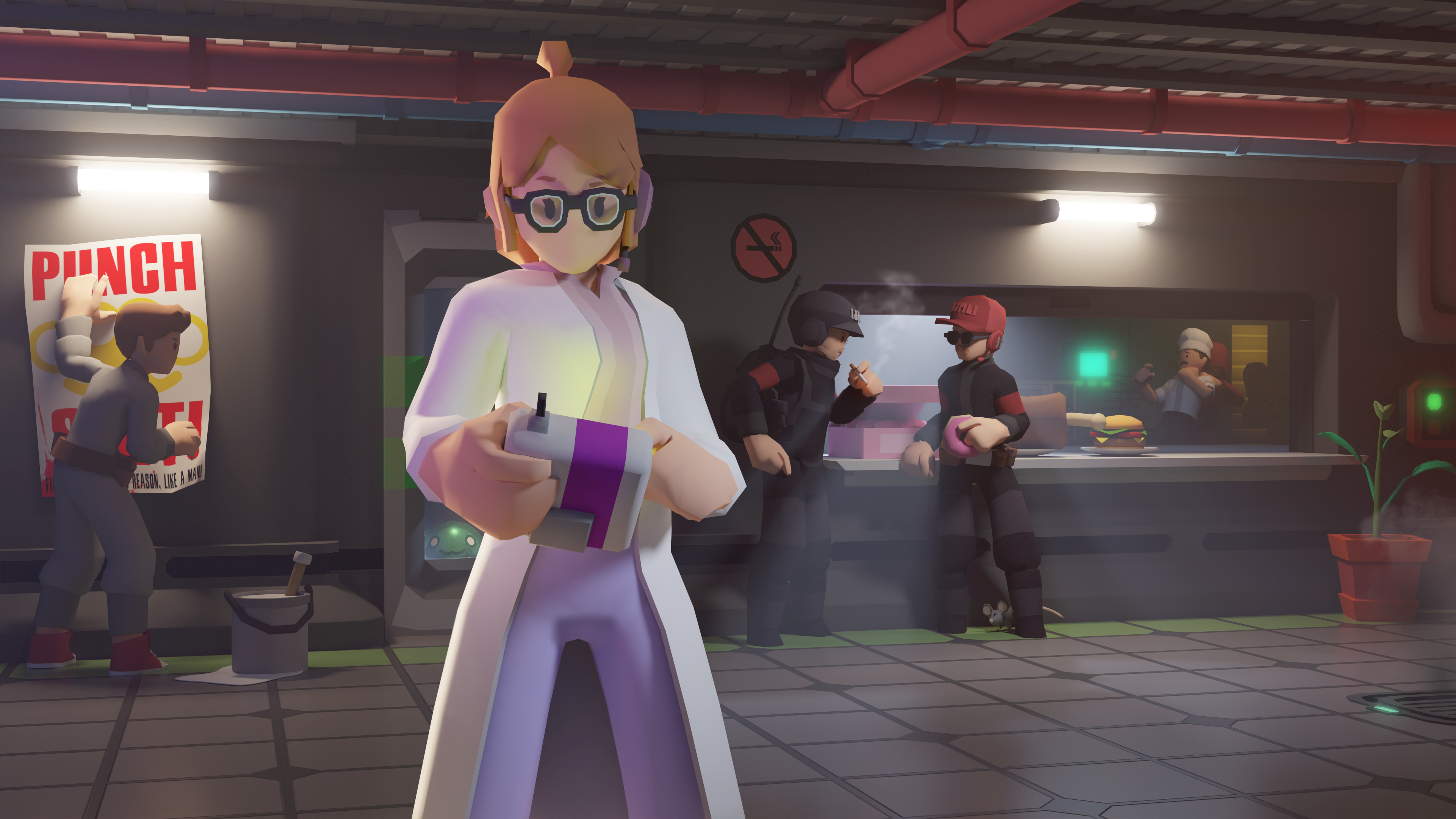 Written by – Probably Not / CosmicCoincidence


Spatial awareness is a necessary skill to do your job.

It’s a new year, and we have a new wave of contributions. Strap in yall.

Our biggest and probably most important feature this month has got to be our fancy new lobby system. John was hard at work this month separating the map, primary menus, and lobby from a unified scene to individual scenes. The result is more modular in the sense that the editor can more easily work on these systems without impacting the others as much. It also allows us to quickly swap between map scenes now both in the Unity editor but now in-game, getting us 1 more step closer to a complete game loop.

Connecting players will now be initially greeted with a basic lobby to hang out in (character customization and chat will eventually be added in here) until they’re ready to join. The game host also now has access to an admin menu to control various parameters for the game. This ranges from changing the map, game mode (just for show currently), and setting a timer for the length of time until the next round starts.

Originally started by DefNotEric many moons ago, but recently resurrected and expanded by BroodjeKipcorn, our new tilemap editor is a significant improvement over our previous one. Now the editor can edit/add tilemap layers individually rather than having to rebuild all layers on a tile if a single layer on that tile needs a change. You can even hide the visibility of layers in the editor to make it easier to see what you are working on.

The map editor also now has an object search functionality and the objects have a small thumbnail display so the user can find what they are looking for more quickly.

The other big improvement is the addition of tilemap rotations. As we did not have proper tilemap rotations built into the editor before, the user would have to manually edit the Y-axis rotation on each prefab after adding it to the map. Now the user can simply select a cardinal direction for the object to face before adding it to the map. Many small bugs related to the tilemap were also taken care of with this new tilemap editor.

Alainx did a great job over the last couple of months, overhauling our existing system for containers. This new system uses a Resident Evil-like 2-dimensional modular approach, allowing things like containers on child objects, multiple containers per object, and more. The system also adds functionality for things like wearables (clothing) for mobs. The system is server authoritative, which should be robust when protecting against cheating. This new system flushed out some lingering inventory-related bugs as well.

John cleaned up many more models this month.

Konstatin made a nice new texture for the station AI. You probably recognize her.

ProbablyNot is back to being this month’s cover artist.

To kick off this new year, we are finally launching a means to support the development of this game via donations. We have launched a Patreon, SubscribeStar, and even a multi-chain crypto wallet + .crypto domain (SpaceStation3D.crypto) which accepts multiple cryptocurrencies, see the full list of accepted cryptos at the bottom of this page or at the top of our contribute page.

The money gathered from our donations will primarily be used for paying technical bounties which we will launch once we have received adequate initial funds. Eventually, the donations will also be used to help cover any costs to continue developing & hosting this game (like paying to host servers).

One very important thing we want to ensure is that we are COMPLETELY transparent about how we use your donations for this project. So we have set up a #money-log channel on our discord which will log our donations and how they are spent.

It has been a rough past year. But 2021 is already showing some promise, especially for SS3D. Stay safe and stay tuned everyone.

Also join our Discord if you haven’t already, por favor.