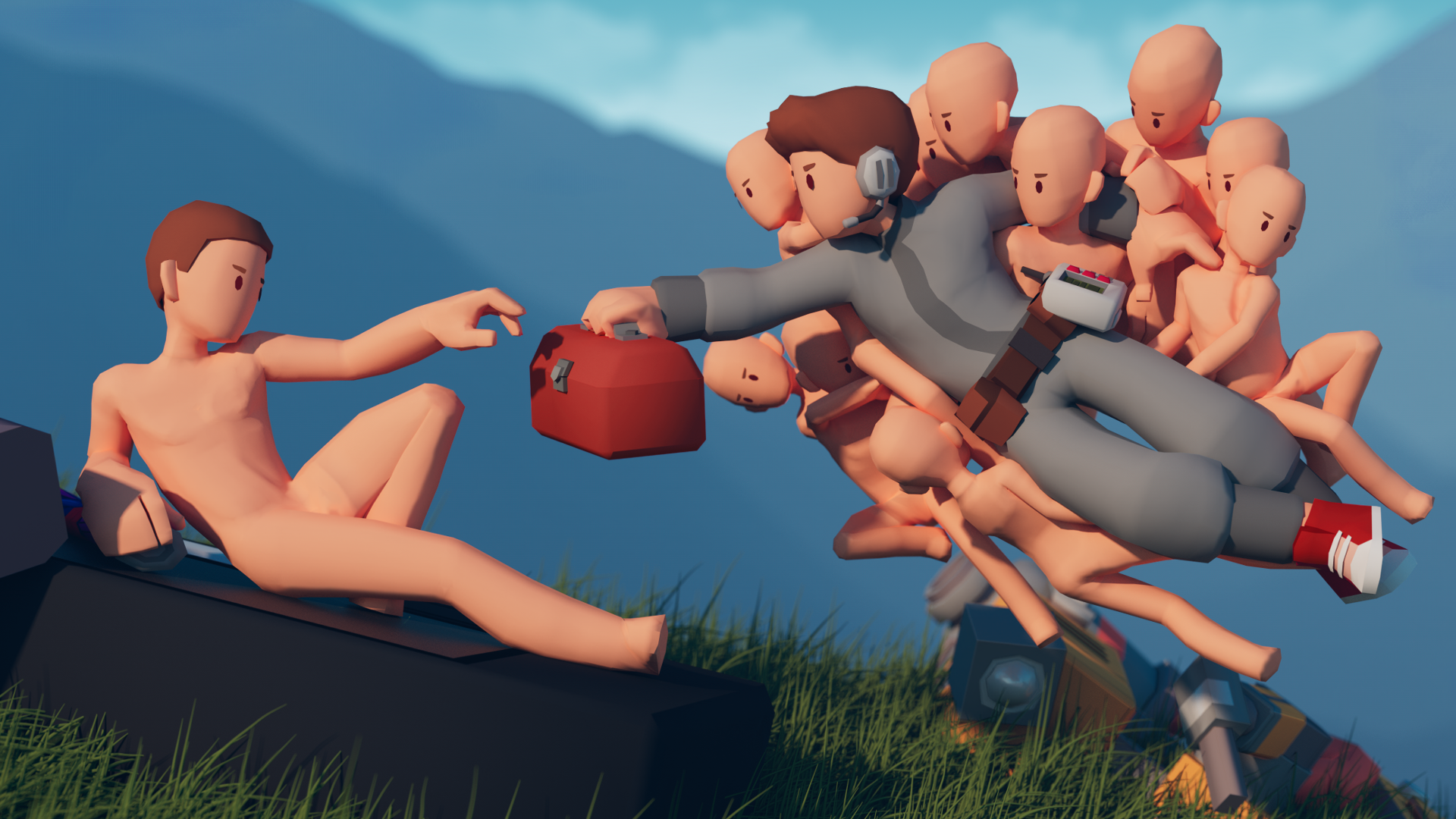 
The Gods bestoweth upon thee a tool of great power, it is your duty to decide whether you shall use it to build civilizations or destroy them.

This month seems to have flown by for us at SS3D as we finish paving our foundation and begin building a structure on top. We are excited to show this month’s features so I’m skipping the long summary and let’s get straight to it…

Early in the month Milly added a volumetric shader-based FOV system. Which has customizable variables for color, transparency, radius, & POV which can be useful for different effects like optical meson goggles, x-ray, blindness, etc. After receiving some view obstacles, fixes, and other tweaks from Seteron, it’s looking really great!

Last month we implemented the microwave and a single simple recipe (microwave a flat dough to make a tortilla) for proof of concept which had some issues. Alainx277 fixed the issues so you can make tortillas again. Also, if you have an incorrect recipe the contents will turn to ash.

This month he has added another proof of concept recipe, but this one being with reagents. You can now dispense various booze types from the booze dispenser in the kitchen and when mixing 3 parts Vodka with 2 parts Kahlua it will make a Black Russian mixed drink.

Something that we are all excited to see, is that BroodjeKipcorn has revived, refreshed, & implemented our old atmos code! The system uses the Ideal Gas Law (PV=nRT), taking moles, pressure, volume, & temperature into account. Differences in pressure or temperature will equalize over time, different gas types mix together, gas types of different specific heat values, significant changes in pressure will move items across the room (basically wind). Currently, we have 4 gases implemented (Oxygen, Nitrogen, Carbon Dioxide, & Plasma) as proof of concept but they do not yet have unique properties/colors.

After basic area atmospherics were in BroodjeKipcorn decided to work on the basics for atmos pipes and their machinery as well. Currently implemented pipe machines include, manual valves, pressure pumps, volume pumps, gas mixers, & gas injectors. (Note that the pipes were not yet updated in the video below, hence we many of the connections on them are incorrect.)

Finally, Goao added in some atmospheric canisters to the map and some basic functions for them so that the player has a way to play with the atmos system in-game. You can open the valve on a canister to release gas into the environment, or even use the ‘increase pressure’ function to release a lot of gas at once to make some wind.

Another thing Alainx277 implemented last month but was not shown due to not working at the time of the blog, was ragdolls. This month he re-added player-item collision, fixing the issues with the ragdolls so you can now slip (or watch your friends slip) on banana peels and soap. Currently, the implementation is not perfect as sometimes it’s difficult to trigger a slip but we have considered other collider methods on how to improve this already.

And with the recent atmospherics work where items get pushed around by ‘wind’, Alainx277 made the player ragdoll upon hitting such wind as well. The threshold for this can be adjusted or potentially changed based on what gear the player is wearing.

Also courtesy of Alainx277, the player can now examine their surroundings by holding the ‘Shift’ key to see the name of an object and a description beneath the name (most items don’t have a description yet). This feature also has some kinks to work out still as you cannot examine an object that is within another object’s collider (such as wall fixtures).

LightVelox managed to work on some basic functionality for power cells. They can hold a certain amount of charge, and be placed on the charger to recharge any lost charge. The charge of the power cell is currently displayed as a meter in the hand slot it is held in.

Another huge contribution this month by BroodjeKipcorn was an overhaul of our tilemap system. Before, all we had per tile was a turf (floor/wall) and a singular fixture that could be placed (table/light). But we now have a system that supports multiple tile fixtures and reworks the layers so now there is a plenum layer beneath the turf which acts as our base layer upon which other layers are built.

Basic disposals are now in thanks to Goao. He has updated the model itself a few times and added a script and sound for basic item flushing, though there are many kinks to work out still.

Alainx277 added the boombox music functionality to the jukebox now as well.

LightVelox added item weights to all items so they might be affected by atmospheric wind differently.

Goao added a new skybox and made it rotate very slowly.

Throughout this month, CosmicCoincidence went through a lot of the high priority models (mostly ones relating to the tilemap), fixing them and updating them in the project. These include the plenums, pipes, wires, & wall mounts seen in the section above, as well as Basecode’s girders.

CosmicCoincidence also remade the entire map after the tilemap overhaul (the new map features a pseudo electrical circuit and disposal circuit), as well as fixed some orientation issues with the connection scripts, re-exported all connectible objects, and fixed the placement of the cryotube.

Alainx277 fixed our radial menu shortcuts, improved the atmospheric system performance, repaired our warning messages, fixed interactions not working within airlock colliders and beneath the player, & prevented players from constructing tables/walls on themselves or others.

Seteron fixed the FOV view obstacles multiple times this month, and fixed the color of the human skin material.

BroodjeKipcorn allowed tile connections to happen on the plenum layer (so the plenum covers connect appropriately).

A new contributor this month, SoyBoi, fixed an issue with the player’s hands getting locked up upon picking up items from the janicart.

LightVelox fixed the interaction wheel showing an interaction being selected even before one was selected.

Goao fixed dropped items’ rotations, fixed an issue with the player floating in the air, added missing network transformations to a bunch of objects, fixed door animations on everything that has a swinging door (microwave, fridge, lockers, & crates), and fixed the poster’s texture settings.

New wires (with many color variants) & high-voltage cables from CosmicCoincidence.

Basecode made some fresh socks for the player which are a combination of models and textures.

A nice airlock sensor by Trerri.

Comradecheeki is back this month with an E-Cig, a display case, mosin nagant rifle and revolver.

From Kiwav this month, a wooden bucket and several deagle variants.

And a Gnoll race by LocalHyena.

These 2 new suspicious posters from CosmicCoincidence.

"This poster seems to be referencing the 13th space station of the corporate fleet, this particular station is infamous for its bad luck."

"There seems to be 2nd poster as well, a misprint of the first with an obvious typo. I wonder if it could be even worse luck."

Another new contributor this month, sKRiBEL, submitted a bunch of much-needed sound effects for us most of which are male vocal sounds. These include hiccups, sniffs, coughs, chokes, throat clears, slurps, burps, screams, whistles, farts, and finally a soda can opening. Unfortunately, I don’t have an efficient way of showing these on the site so you will have to wait to hear these once they get implemented in-game.

Another epic wallpaper by ProbablyNot for this month’s blog cover art.

Hey you. Are you still not in the Discord? If not, come on down and join us in the development process. The developers love to hear ideas from the community, as well as appreciate any feedback.