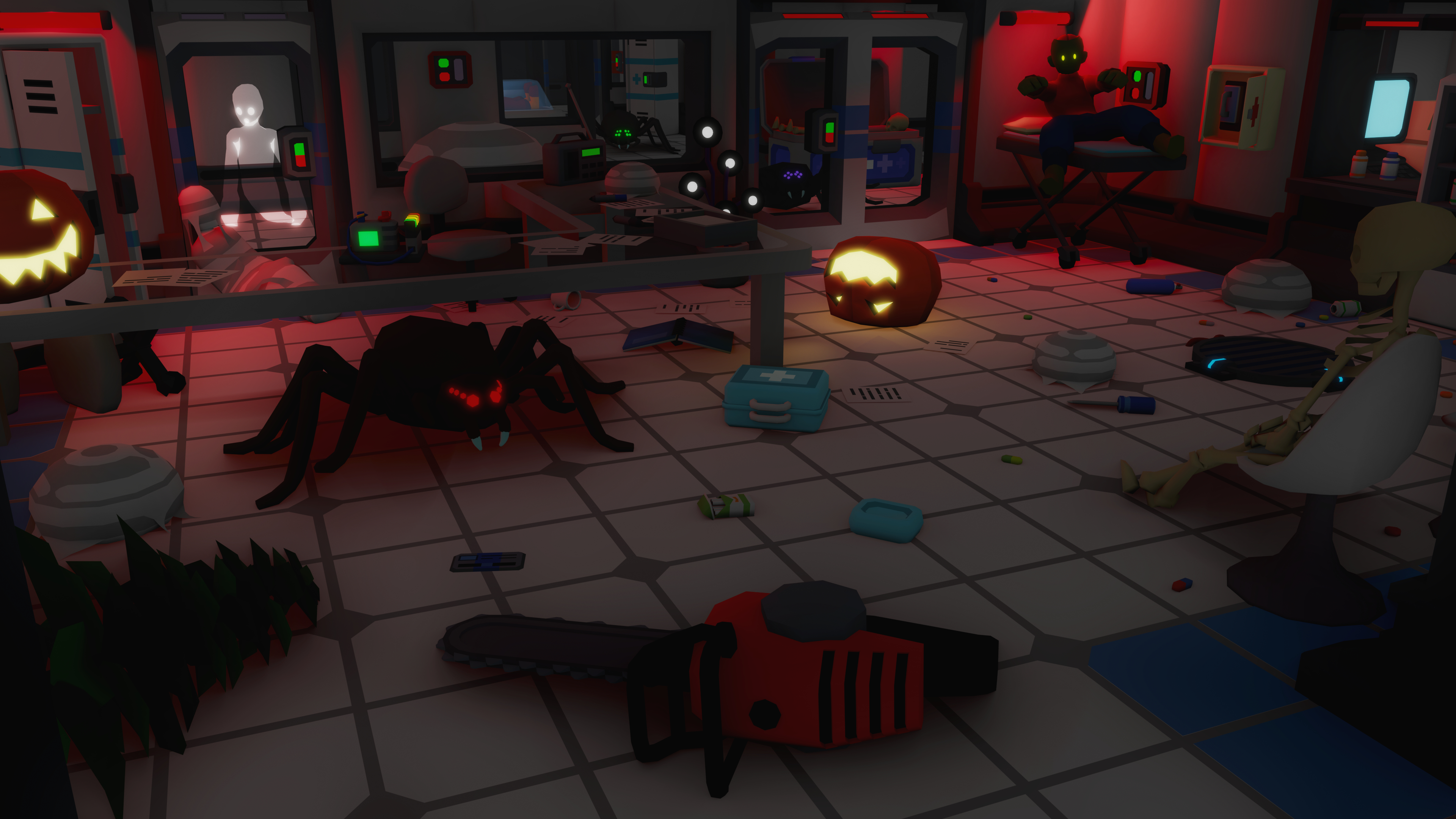 
I was a little afraid, myself, to be frank.

Apparently asking nicely and casually for help is all that it takes for a bunch of lovely programmers to suddenly pop their heads out of the woodworks and offer their time to help the project. November has brought us a lot of new faces, with a lot of welcome talent. Things are moving.

Here’s an infographic courtesy of Eiko that describes how tiles are intended to work in RE:SS3D.

Definitely Not Eric has sorted out the tile-based system and gotten tiles and tile changes networked, and prototyped tile serialization/deserialization. Autoconnect systems are working again, and are presently being used to autoconnect walls (even different types of walls) and individual layers of pipe, though autoconnecting pipe might probably change later on. Different types of floors and the states of said floors (see infographic) are networked.

Alongside all this tilework comes a tilebased map editor for Unity, which will allow for maps to be quickly and reliably constructed through the future of the project.

Courtesy of Singulo, ragdolls are now implemented and synced between players. There are forwards and backwards slips.

Throughout the history of the project, even in the times of *beep, the human model has been an items subject to frequent improvement and modification. As constant changes to something so fundamental and important tends to cause generally unwelcome ripples that disturb other systems using it, we are happy to say that this month, Eiko has accomplished the mission of transforming the human model into (hopefully) its final version.

The process for this was one that involved a measure of ripples within itself. Starting with scrapping the hands and starting over from scratch, it became apparent that the character rig had to be adjusted for the slightly different handshape.

At this point, recognizing that this would break the rig and stuff anyway, Eiko decided to go all-in and make a bunch of other adjustments to the rig and model. Geometry was added to polish aspects of the models that were in need of it, such as the hips, shoulders, knees, and elbows. Both the human model and the base jumpsuit model were entirely re-weighted. Finally, it was resized to the size of *beep’s original model before d32’s version (of which the current model is derived) was adopted, which stood a head taller and had always needed to be resized by a percentage to comfortably fit in the station environment.

Also, we have a jawline slider, now.

Also from Eiko this month, more dabbling into the dreams of having RE:SS3D but in 3D. Actually integrating Z-levels into the game continues to remain a serious issue for mostly the purely mechanical issues involving the camera perspective and how information is displayed or isn’t displayed to the player. At the time of writing, these problems have no adequate solution that doesn’t involve changing the player perspective entirely.

Nevertheless, we frequently find ourselves considering Z-levels into design, for if’n the day comes that those mechanical issues are provided solutions. This month, walls have been modified to be receptive to the possibility of z-layers.

Amongst our new faces is one Erythro, who has proven themselves capable of some rather jarring shader witchcraftery. Product of this shader witchcraftery is some new fire WIP. Last month’s fire from Eiko, if you may remember, was good and fit the artstyle extremely well, but wasn’t quite appropriate for “object on fire” and “hallway engulfed in flames” types of fire. This month, Erythro appeared and provided a solution in the form of a procedural fire shader, made with vertex displacement and perlin noise for the flame effect, and fresnel and emissive to fake the volumetric aspect.

Also courtesy of Erythro, some WIP singulo and some WIP bloodied item shaders:

While we don’t have networked dead players to show you at the moment, we’ve got a ghost model from Eiko and concept stuff ranging from “adorably spooky” to “lovecraftian nightmare” from Honkette, which finds itself more than appropriate for the Spooktober setting.

Starting with what we have right now before moving on to conceptual stuff, player ghosts have been sorted out in their most basic form. They will inherit features like hairstyle from the late crewmember. Like in SS13, ghost cosmetics will be optional.

Now onto conceptual ghosts. On the left here, we have what has already been realized above. On the right, we plan to have such adorable pacman-esque ghosts for dead non-humanoid players. The two in the middle are intended for more sinister things of an antagonistic nature.

Fitting of the theme of horror, description will be withheld.

From Goao, a Spooktober poster, a lovely render, new beakers, and some machines you might or might not recognize from medical.

From Erythro, suit storage, shuttle engine, and some various items of varying degrees of danger.

From Brukas and Connie, a collection of fruit and a protokinetic accelerator, respectively.

From Probably Not, a spooky render encapsulating an emotion I struggle to communicate.

For reasons completely beyond me, our humble music section has found itself quite busy over the past month. Courtesy of Eiko, here is this resulting product of musical dabbling:

This is our monthly devblog, serving as an alleged anchor for showing our milestones of progress. Better late than never. Big thanks to CosmicCoincidence for peeling Sunberry off the ground and making this devblog happen. It feels nice to be lucid again.

Remember folks, Spooktober might be over, but skeletons last forever.